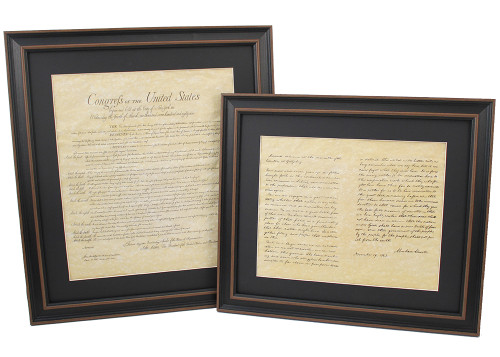 In November 1863, President Abraham Lincoln was invited to deliver remarks, which later became known as the Gettysburg Address, at the official dedication ceremony for the National Cemetery of Gettysburg in Pennsylvania, on the site of one of the bloodiest and most decisive battles of the Civil War. Though he was not the featured orator that day, Lincoln's 273-word address would be remembered as one of the most important speeches in American history. In it, he invoked the principles of human equality contained in the Declaration of Independence and connected the sacrifices of the Civil War with the desire for "a new birth of freedom," as well as the all-important preservation of the Union created in 1776 and its ideal of self-government.

This set is made in the USA with solid wood frames, glass front, mat, paper duster backing and wall hanger. Both documents are printed on antique parchment paper that goes through an 11 step process to give it an aged authentic look. Each paper is unique with characteristics such as (but not limited to), golden or yellow hues, crinkling, puckering.