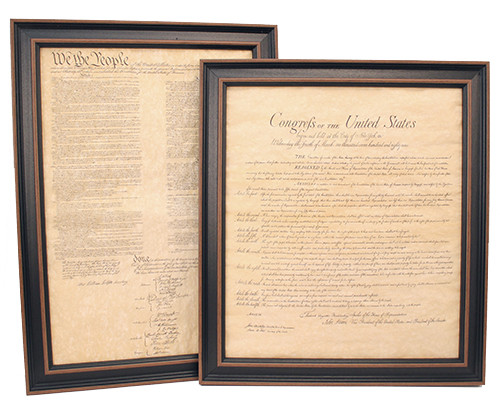 Save BIG when you buy both ... and shipping is always FREE!

The United States Constitution and Bill of Rights are the greatest documents ever penned in human history.

The absence of a "bill of rights" turned out to be an obstacle to the Constitution's ratification by the states. It would take four more years of intense debate before the new government's form would be resolved. The Federalists opposed including a bill of rights on the ground that it was unnecessary. The Anti-Federalists, who were afraid of a strong centralized government, refused to support the Constitution without one. In the end, popular sentiment was decisive. The American Bill of Rights, inspired by Jefferson and drafted by James Madison, was adopted, and in 1791 the Constitution's first ten amendments became the law of the land.

We proudly offer this framed United States Constitution and Bill of Rights set at an incredible price! These exact replicas are printed on antique parchment paper, distressed black frame made of solid wood, glass front, paper duster backing with wire hanger.  They will add character to any room... every Patriot's home deserves a framed replica of the United States Constitution and Bill of Rights!  The parchment paper used goes through an eleven step process to give it an aged look. Each paper is unique with characteristics such as (but not limited to), golden or yellow hues, crinkling, puckering.