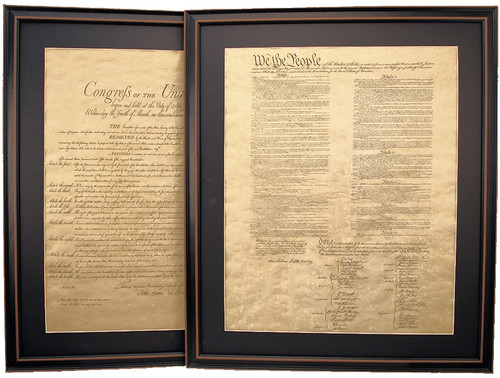 The United States Constitution is one of the two greatest documents ever penned by man, the other being the Declaration of Independence.

Written principally by James Madison, the Constitution is the oldest written constitution still used by any nation. It serves as the framework for the organization of the United States government and for the relationship of the federal government with the states, citizens, and all people within the United States.

We proudly offer this framed and matted United States Constitution & Bill of Rights! These exact replicas are printed on antique parchment paper set in a mat, distressed black frame made of solid wood, glass front, paper duster backing and wire hanger. It will add character to any room... every Patriot's home deserves a framed replica of the United States Constitution and Bill of Rights!  Each paper is unique with characteristics such as (but not limited to), golden or yellow hues, crinkling, puckering.